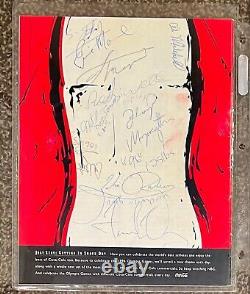 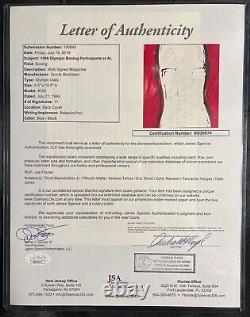 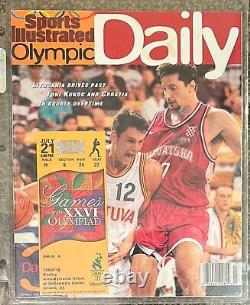 Mayweather won each of his 50 professional bouts, beating the likes of Manny Pacquiao, Ricky Hatton and Canelo Alvarez; retiring with the top undefeated boxing record in the history of boxing. Many points should prove this auto as the rarest Floyd Mayweather signature in the world. TEENAGER FLOYD'S OLYMPIC DEBUT.

This is certified the exact day of Floyd Mayweather's Olympic debut, July 21 1996, the day Floyd defeated Bakhtiyar Tileganov from Kazakhstan. FLOYD PERSONALLY DATED HIS SIGNATURE. We've never seen a Floyd auto which is dated. You'll notice "96" under his autograph, which is the year Floyd participated in the Olympics & his professional debut year, where he fought fellow newcomer Roberto Apodaca on October 11, 1996, dating this autograph less than 3 months prior to his professional debut.

You'll see a rare, full name signature, which is typically from the beginning of Floyd's career. Sports illustrated dated July 21, 1996.