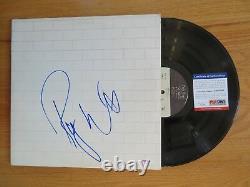 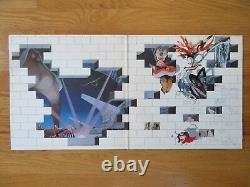 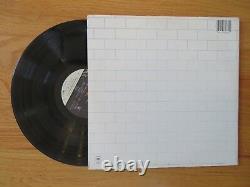 ROGER WATERS signed THE WALL 1979 Record / Album Set signed on the front cover in Blue Sharpie by ROGER WATERS in Excellent Condition RECORDS Included in Playable Condition. From Wikipedia, the free encyclopedia. The Wall is the eleventh studio album by English rock band Pink Floyd. It was released as a double album on 30 November 1979 in the United Kingdom by Harvest Records and in the United States by Columbia Records. Bassist and songwriter Roger Waters conceived the album as a rock opera during Pink Floyd's 1977 In the Flesh Tour, when he became so frustrated with the audience that he spat on them.

Its story explores Pink, a jaded rockstar character that Waters modeled after himself and the band's original leader Syd Barrett. Pink's life begins with the loss of his father during the Second World War and continues with abuse from his schoolteachers, an overprotective mother, and the breakdown of his marriage; all contribute to his eventual self-imposed isolation from society, symbolised by a wall.

The band, who were then struggling with personal and financial difficulties, supported the idea. All tracks written by Roger Waters, except where noted. "The Thin Ice" Waters, Gilmour 2:27.

"The Trial" (writers: Waters, Ezrin) Waters 5:13. "Outside the Wall" Waters 1:41. A ll Autographs obtained in person through Show Signings, Before at Sporting Event, Golf Tournaments and Special Dinner & Charity Events. Comes with My Certificate of Authenticity (COA) from Glenn's Stadium Heroes and PSA / DNA AE98308. This item is in the category "Entertainment Memorabilia\Autographs-Original\Music\Rock & Pop\Records".