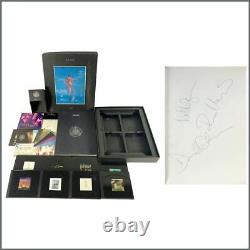 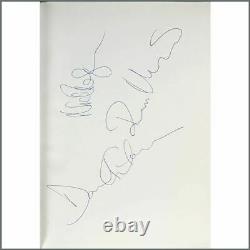 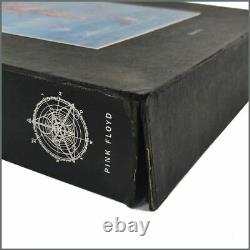 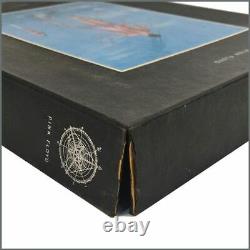 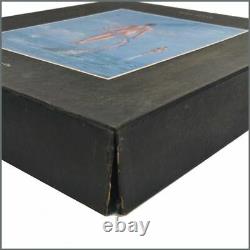 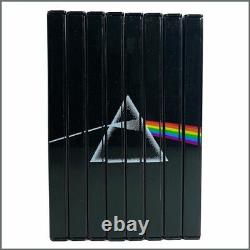 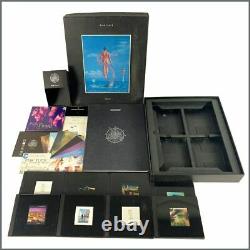 A nine-CD box set released by EMI Records in 1992 to celebrate Pink Floyds 25. The fly leaf of the book within the box set has been signed by David Gilmour, Richard Wright and Nick Mason in blue pen. The box set consists of the following: 8 CDs with remastered versions of A Saucerful of Secrets, Meddle, The Dark Side of the Moon, Wish You Were Here, Animals, The Wall, A Momentary Lapse of Reason which are all housed in black jewel cases which when lined up bear the iconic prism image from Dark Side of the Moon on the spine. A box set exclusive CD titled The Early Singles which compiled the bands first 5 singles in their original mono mixes. A 112-page hardback book detailing the bands history. An envelope containing 8 postcards with album artwork printed on them. Also included with the box set is a concert ticket stub from the Pink Floyd performance at Earls Court on the 27. October 1994 and a hospitality invitation. The items are accompanied by a letter from the recipient of the signatures which reads: My name is Martin. I have a good friend whos [sic] name is Paul Russell, who until like me he retired was the President of Sony Europe so I got to go to a lot of gigs. By far the best was Pink Floyd at Earls Court in 1974. Paul and I went on the first night which was the 12th October. Which was cancelled owing to some seats collapsing. We where [sic] told we could return on a date of our choice. We went back on Wednesday 20th October. After the first set, we were invited by EMI to hospitality. In there we were gathered around in a circle talking to other members if the music industry. A man was going around the outside of us trying to get in.

He got behind me and under my arm I had a concert program and a book out of my box set, which had been given to me by Sony in the USA. He took the book from under my arm and swiftly left, I asked Paul who it was, and that he had taken my books Paul said dont worry it was Steve ORourke and that he would return them. A short while later Steve ORourke came up behind my seat and gave me back my book, along with some t-shirts, it wasnt until we got back to Pauls place that I saw that the members of Pink Floyd had signed the books. The box measures 29.7cm x 35cm (11.6 inches x 13.8 inches).

The condition is as follows: Three corners of the box lid have split and there is wear to the edges and top. There is wear and scuffing to the sticker on the bottom of the box.

One of the flaps on the upper tray has been torn away and half of another has torn. There is some tearing to the horizontal sections of the lower CD tray. The condition of the box is good plus.

There is some scuffing and scratching to the black CD cases. There is some wear to the Early Singles CD case.

The condition of the ticket stub and invitation is very good. The first item is charged at the normal rate. Near Mint = Almost like new with one or two very minor flaws. Excellent = Minor wear yet looks attractive and is perfectly usable. Very Good = Some wear and tear but overall presentable and usable. Good = Apparent wear and tear but with obvious deterioration of the condition.

A plus or minus after the grading indicates that the condition is marginally higher or lower than the stated grade. The item "Pink Floyd Signed Shine On Book Box Set Ticket Stub & Hospitality Invite (UK)" is in sale since Thursday, November 26, 2020. This item is in the category "Music\Music Memorabilia\Rock\Concert Memorabilia".

The seller is "tracksuk" and is located in Chorley. This item can be shipped worldwide.