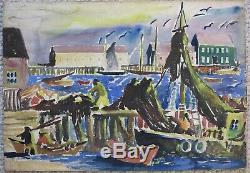 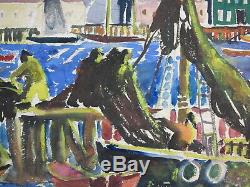 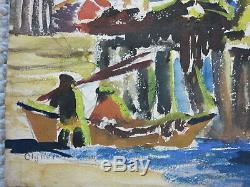 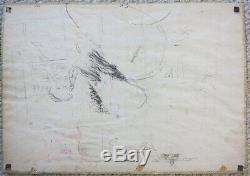 Watercolor and pencil on paper measures 15 x 21 inches. Excellent condition with a very minor tear in margin right. His works possess a clear and simple style, easily understood by the masses. Born in Perkasie Pennsylvania, 20 miles north of Philadelphia, Clymer was the.

Losing his mother during childbirth, he was raised by his eldest sister. He attended Drexel University in Philadelphia, studying Art and Architecture and worked as an Architect in the years following World War I. During this time, Clymer met the artist Gwenyth Waugh, daughter of the renowned marine painter, Frederick Judd Waugh. His thrust then changed from Architect to Artist.

Together, the couple travelled to destinations such as Spain and Newfoundland, where they gave birth to their only daughter. In the early 1920's, Clymer and family settled in Provincetown, MA and quickly became associated with notable artists such as Helen Sawyer, Edwin Dickinson and the Waughs. About 1940, Clymer moved to New York City, and in 1946, he and his family settled in a home on Schunnemunk Mountain in New York (close to Newburgh, New York, in the Hudson River Valley).

He lived there until circa 1978, when he moved to his granddaughter's house near Schenectady, New York, where he later died. Clymer worked with ease in the mediums of watercolor and oil painting, much like James Fitzgerald and Marsden Hartley.

Parallels exist in the work of the three artists, such as their affinity to the New England coast for their subject matter. Further, these artists pursued highly personal styles, making it difficult to link them to any one art movement.

All three artists were adept at blending naturalism and abstraction, while maintaining a respect for and a keen observation of nature. Clymer's tendency was to depict permanence and impermanence in nature, painting simple, colorful forms to create vistas in sea and sky, or mass in mountains and buildings.

He then would present figures in motion, such as humans, birds and boats to complete his artistic theme. Like Hartley and Fitzgerald, Clymer's economy of detail states so much with so little, allowing the work to possess a powerful and expressive quality. Clymer was a member of the Provincetown Beachcombers Club, a select group devoted to the arts, as well as a member of the Provincetown Art Association, where he exhibited 65 works between 1922 and 1940. His works were also featured in exhibits at the Pennsylvania Academy of Fine Arts, the Art Institute of Chicago, the Corcoran Gallery and various galleries in NYC during the 20's, 30's and 40's. Who Was Who in American Art. The item "James Floyd Clymer 1920's painting Provincetown MA modernist artist" is in sale since Tuesday, November 12, 2019.

This item is in the category "Art\Paintings". The seller is "citypictures" and is located in Hudson, New York. This item can be shipped worldwide.