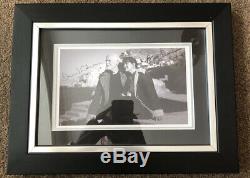 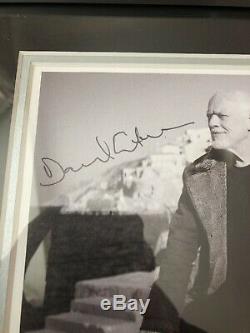 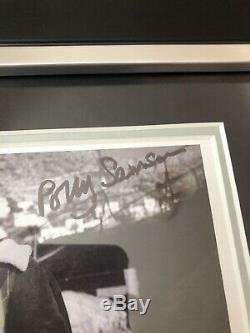 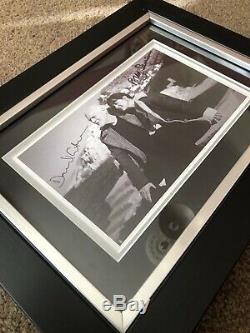 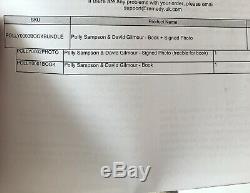 A rare opportunity to own a 9x6 photo hand signed by Pink Floyd lead guitarist David Gilmour and his wife Polly Samson. This photo has been fully mounted with backboard and frame, the size of the frame is approximately 14.5 x 11 with a a4 Mount. David Gilmour joined Pink Floyd as guitarist and co-lead vocalist in 1968 shortly before the departure of founding member Syd Barrett.

She is married to musician David Gilmour and has written the lyrics to many of Gilmour's works, both as a solo artist and with the group Pink Floyd. She is credited as a co-writer on seven of The Division Bell's 11 tracks and, with the retrospective credit given to Clare Torry for her vocals on "The Great Gig in the Sky". She is one of only two female co-writers of any Pink Floyd songs. She also wrote lyrics for Gilmour's 2006 album, On an Island and made a guest appearance on piano and vocals.

She contributed lyrics to "Louder than Words", the only track on Pink Floyd's 2014 release, The Endless River, to contain any sung lyrics. Samson has also contributed lyrics to half of the tracks on Gilmour's latest album, Rattle That Lock (2015), which were inspired by Paradise Lost, an epic poem by John Milton.

If you have any questions, please don't hesitate to contact me. The item "David Gilmour Pink Floyd Polly Samson Hand Signed Photo Framed Display Rare" is in sale since Thursday, April 16, 2020. This item is in the category "Collectables\Autographs\Certified Original Autographs\Music". The seller is "sw_443" and is located in Liverpool.